An ordinance to be introduced this fall would also ban smoking in city parks, on multi-use paths and anywhere within 25 feet of public bus stops and libraries. It would also cover city-owned open space, including leased agricultural lands and any associated houses, and anywhere in Chautauqua.

On Tuesday, the city extended its existing smoking ban to the Boulder High School campus, The Daily Camera reported (http://bit.ly/Y6IGfY).

One end of the school property has attracted smokers driven from a lawn outside a library that bans smoking. The school has its own smoking ban that has not been enforced by the city.

Boulder’s smoking ban applies to flammable tobacco products, such as cigarettes and cigars, as well as e-cigarettes. Chewing tobacco is not affected.

Councilman George Karakehian, who owns a business downtown, said alleys are littered with cigarette butts that get washed into Boulder Creek.

Councilman Andrew Shoemaker said an alley ban would be hard on Boulder Theater, as smoking is an ingrained part of the entertainment industry culture.

Councilwoman Suzanne Jones said culture couldn’t be a major consideration if the reason behind the smoking ban is health.

The ban would not apply to the University Hill area. Asked why, Molly Winter, who heads up the Downtown and University Hill Management Division, said University Hill is on the cusp of redevelopment and the city didn’t want to do anything that could be perceived as hurting business.

Karakehian noted initial concerns that the restaurant smoking ban would kill Boulder’s restaurant industry but said instead it has thrived.

If approved, the smoking ban extension would go into effect in March.

About 30,000 Arizona smokers who bought cigarettes online are being hit with bills for thousands of dollars in unpaid state taxes.

The Arizona Department of Revenue says smokers owe the state more than $20 for each carton they purchased after 2006 through online companies that offered discounts by sidestepping state use and luxury taxes.

Smokers who thought they had saved more half off the retail price of cigarettes are receiving letters from the state demanding immediate payment for the unpaid taxes, plus penalties and interest.

Annette Borden of Chandler got a $4,299.20 payment demand last week for cigarettes she purchased online between 2007 and 2009.

“I’m kind of baffled by the fact that they are coming after me,” Borden said, adding that she knew nothing about the taxes until she received a phone call last week from the state. “You’re contacting me seven years later and saying we owe this money. We never received a notice or we would have filed taxes.”

But Borden said she is more concerned the state might not stop at cigarettes. If the Department of Revenue can come after residents for unpaid taxes on cigarettes, she asked, what’s to stop officials from demanding taxes for other online purchases?

The state’s answer: Theoretically, nothing. However, unlike with online-cigarette sales, state officials currently have no way of tracking individual online purchases for items bought on sites such as eBay, where state sales taxes are often not charged or collected.

“Nothing you buy over the Internet is tax-free,” said Sean Laux, Department of Revenue spokesman. “People were buying (cigarettes) thinking they were getting a deal, no tax was applied. That didn’t mean no taxes were due.”

In 2012, federal law made online cigarette sales illegal. Companies were forced to give customer lists and purchase data to the U.S. Bureau of Alcohol, Tobacco, Firearms and Explosives, which distributed it to states.

Laux said the department began notifying taxpayers in 2013 they must pay a use tax of 5.6 percent to 6.6 percent on every pack of cigarettes purchased online. They also have to pay a luxury tax of 10 cents a cigarette, or $20 a carton. Notices went out with specific details about individual cigarette purchases and offered taxpayers an opportunity to avoid penalty interest charges in exchange for immediate payments.

The state is taking the position there is no statute of limitations on the unpaid cigarette taxes, and officials can pursue cases indefinitely. In many cases, laws limit the number of years a state can audit an individual income-tax return. Typically it can go back no more than four years.

Laux said the limitations are lifted if a taxpayer committed fraud or never filed taxes. In those cases, the state can go back as far as it wants.

He said unpaid cigarette taxes are akin to not filing taxes.

“This is no different to us than someone who doesn’t file income tax,’ he said.

A carton of Marlboro Reds in Phoenix today costs about $71. Customers who bought cigarettes online paid about half of the retail price.

Laux said most of the online sales occurred in Arizona from 2006 to 2011. He said bills for unpaid taxes range from hundreds of dollars to several thousand. He said he is unaware of any tax bills that top $10,000.

Borden said she purchased cigarettes online for the convenience factor, not to try to avoid paying taxes.

“It’s shocking,” she said of the state’s effort to collect back taxes. “I’m not going to lie. I bought the cigarettes.”

“My thought process was, ‘Oh my God, do you know how much money I spend online?’ What’s to say they won’t come back to me eight years from now?” she said. “I’ll never buy another thing online.”

Countertobacco.org asked their audience to submit photos of tobacco industry marketing at the point of sale, and were impressed by the breadth and creativity of the photos submitted. Beyond just the contest, they hope these photos will be used to continue POS advocacy work.

Cochise County Youth Health Coalition of Douglas, AZ was one of their Grand Prize winners for their photo (Pictured below) Congratulations to all the winners and many thanks to all who participated! Out of a record 92 image submissions, winners have been chosen in 8 categories of tobacco industry activities at the point of sale (plus a fan favorite!): 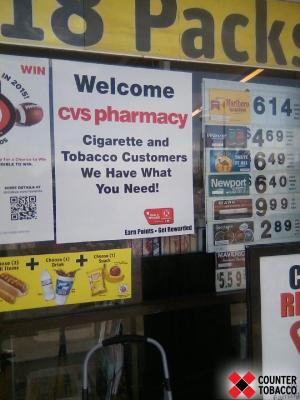 We are beginning our ad participant recruitment efforts for the 2016 Tips From Former Smokers (Tips) campaign and would greatly appreciate your help to broadly share this information. Similar to previous Tips campaigns, we are conducting a national search to identify people who experienced smoking-related health problems and are willing to share their compelling stories.

We have developed the following 2016 Tips campaign recruitment materials and tools we hope you will find useful:

Director, Office on Smoking and Health

Bringing together the public health and private sector to combat tobacco

We will explore how traditional and nontraditional partners can come together to reduce tobacco use and ultimately improve population health and reduce costs to the health care system. A diverse panel will discuss this critical health concern and look for new solutions. We hope you will be able to watch our live webcast and participate via the hashtag #APHATobacco.

Watch the webcast live on Sept 23