STAND is featured as an episode of Teen Kids News, an emmy award winning TV Show aimed at teens. The program airs in at least 88 markets and the show is also made available through educational networks to more than 10,000 schools with 7.5 million students and teachers; and it airs on the American Forces Network, with a reach of 1 million.

Sons of Anarchy Gets ‘Smoked Out’ on Ellen for GASO

As part of Great American Smokeout on Nov. 20th Ellen Degeneres Takes the Smoke Our of Sons of Anarchy. 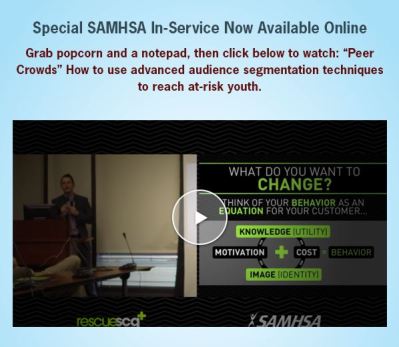 This in-service was recorded on May 15 at SAMHSA.  The special 1-hour seminar reviews the unique world that today’s teens live in, with influences such as culture, technology, social media, and life experiences, including unfortunate traumatic events.  Behavior change messages and programming need to take all of these elements into account.

Presented by Jeff Jordan, President and Executive Creative Director of Rescue Social Change Group, this presentation will challenge the way you think about targeting messages and programming – for addressing substance use such as underage drinking or tobacco use, mental health promotion initiatives, or suicide prevention programs for youth and young adults.

Based on findings from over 100 studies with teens, young adults, adults, and LGBT and other special populations from across the country, Jeff presents insights about targeting messages to peer crowds, what has been successful and why.

On April 17, 2013, Canal+ (France’s equivalent of HBO) released a new tobacco documentary titled Big Tobacco, Young Targets. The film premiered in 40 countries across Africa, Asia, Australia, and Europe. It was directed by Paul Moreira, an award winning journalist and documentary filmmaker based in Paris, France. He has directed several investigative documentaries in conflict zones, including Iraq, Burma, Afghanistan, Israel, Democratic Republic of Congo, and Somalia. He is a former smoker and, like most of us, considers the fight against Big Tobacco a war.

“The people who work in the company forget they are selling tobacco, and think they are selling a product like corn flakes or green beans. The people that work at British American Tobacco between 30 and 40 years of age all have kids. I don’t know one of them who has asked their kids to smoke. On the contrary, everyone has the same moral stance, yet for everyone, it’s as though they leave it at the door and pick it up again in the evening. You can’t do your job otherwise.”